Guided by 15 years of planning, iterative design, and intensive public consultation, Oakridge has become one of the largest mixed-use projects ever undertaken in Canada, encompassing 5 million ft2 of development. Its ambitious, community-building vision is so far reaching that it prompted the unprecedented classification of Oakridge as a Municipal Town Centre (the first outside downtown), and the introduction of a new area plan for the entire neighbourhood.

As a complete community, Oakridge includes a complex mix of new residential, retail, office, public realm, civic, and cultural elements. Over 3,300 new homes will be offered, including 420 affordable units and a diverse range of housing types from studios to family-sized units and seniors living. New workspace will create more than 5,300 full-time jobs and introduce new services. An array of civic amenities will support cultural and social sustainability including a 103,000 ft2 civic centre with community centre, library (the second largest in Vancouver), daycare, performance and cultural spaces, and 55+ centre. Over 1.2M ft2 of retail will be introduced, featuring a dynamic food hall that interfaces with the public park to animate the development and invite social engagement.

The site sits on a rapid transit stop at the intersection of two major crosstown transportation corridors, connecting this new community to the city’s downtown, the airport and Metro Vancouver. This infrastructure is coupled with sustainable transportation options, such as car co-ops, bike and car valets, and bike and car shares. Energy use throughout the development will also be sustainable, delivered via an innovative district energy system and on-site energy plant that will reduce carbon emissions by over 70%.

When originally built, the existing mall replaced the last stand of old growth forest park within the city limits. Oakridge reintroduces this lost nature with the creation of another significant civic amenity – a 9-acre public park that will include playgrounds, playing fields, a woodland, community garden, concert stages, yoga platforms and a running loop. This new greenspace – which drapes over the retail roof in an undulating natural landscape – is central to the architectural expression of Oakridge. The result is a modern street-oriented urban experience, incorporating nature and topography to create an organic expression of architecture emerging from the landscape.

Intent Integrating Nature within a City 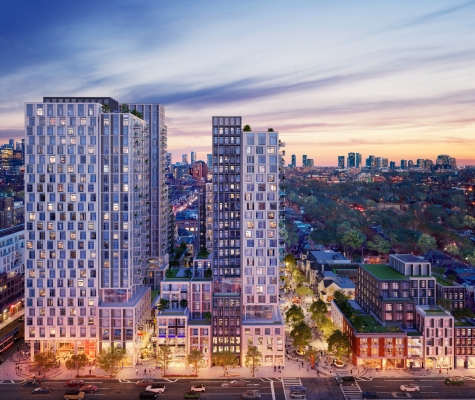